US considers banning laptops on flights from UK airports 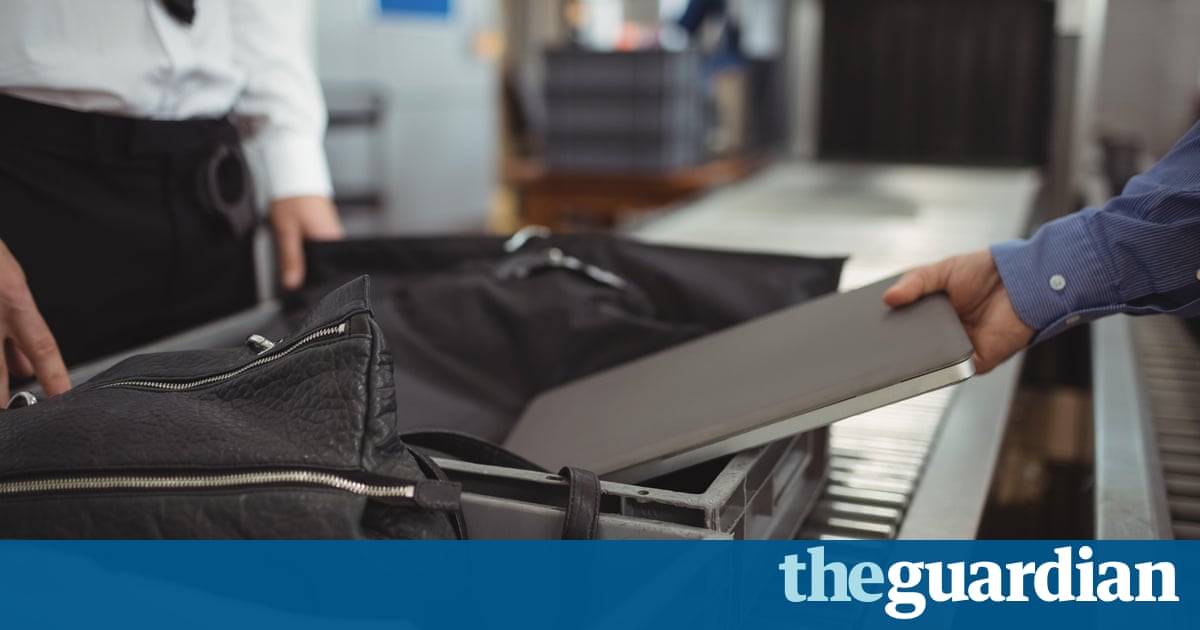 The Trump administration is considering barring passengers flying to the US from UK airports from carrying laptops, sources have told the Guardian.

The proposed ban would be similar to one already imposed on travellers from several Middle Eastern countries.

British officials understand that their US counterparts are looking at extending the ban which prevents any devices larger than a smartphone being taken as carry-on luggage to flights from Europe.

One Whitehall source suggested to the Guardian that although it was not certain that the ban would be extended to the UK, the US was considering doing so.

The US government unexpectedly imposed the ban in late March for flights from 10 airports in the Middle East.

Passengers must stow their devices in checked-in baggage on flights from the affected airports in Egypt, Jordan, Kuwait, Morocco, Qatar, Turkey, Saudi Arabia and the United Arab Emirates.

All are close US allies and none are covered by the Trump administrations attempts to ban travellers from six other mostly Muslim nations.

Hours after sending a confidential edict from the US Transportation Safety Administration (TSA) to airlines, the Trump administration hastily arranged a press briefing to explain that the ban had been imposed after intelligence emerged that terrorists favoured smuggling explosive devices in various consumer items. The TSA directive is understood to be valid until 14 October.

It was not immediately clear why US authorities might want to extend the ban on taking electronic devices such as tablets, e-readers and laptops to flights from European airports.

Gillian Christensen, a spokeswoman for the US Department of Homeland Security, said: Weve said we will continue to evaluate the threat environment and make determinations based on that assessment, but we have not made any decisions on expanding the current restrictions against large electronic devices in aircraft cabins from selected airports.

The UK has also banned electronic devices on flights from six countries: Egypt, Jordan, Lebanon, Saudi Arabia, Tunisia and Turkey, with UK airlines including British Airways and easyJet among those affected.

While the US ban applies to anything larger than a smartphone, the UK regulations give specific dimensions.

The bans sparked criticism from technology experts, who said the new rules appeared to be at odds with basic computer science.

Nicholas Weaver, researcher at the International Computer Science Institute at the University of California, Berkeley, said last month: It doesnt match a conventional threat model. If you assume the attacker is interested in turning a laptop into a bomb, it would work just as well in the cargo hold.

Restricting electronic devices to checked baggage for flights from the Middle East has been a commercial boost to US carriers at the expense of their Gulf rivals, which include Emirates, Etihad and Qatar Airways.

US airlines have long contended that the three fast-growing carriers benefit from unfair government subsidies with which American, Delta and United cannot compete and have lobbied the Trump administration to intervene. All three Gulf airlines consistently deny that they receive such benefits.

However, extending the restriction would potentially hit US airlines, given the volume of traffic across the Atlantic to airports such as Heathrow. American airlines operate a relatively small number of flights to destinations in the Middle East.

Some Middle Eastern airlines have resorted to lending tablets to business and first-class passengers and allowing them to check devices at the gate, rather than the check-in counter.