Despite the climate of fear in the Philippines, a growing number of churches have opened their network of safe houses to people at risk of being killed 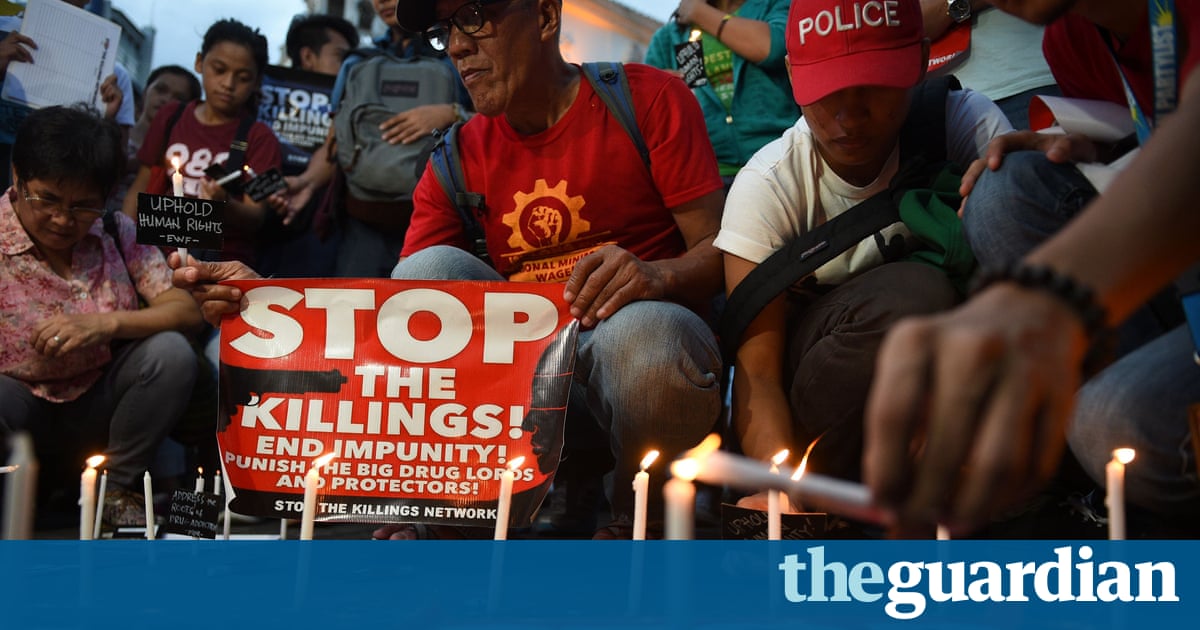 The Catholic church in the Philippines is operating a network that hides addicts and others targeted in president Rodrigo Dutertes bloody drug war, priests have told the Guardian.

More than 7,000 people have been killed by Philippine law enforcement officers and vigilantes in Dutertes crusade against alleged addicts and dealers, often in hit-and-run style attacks by gunmen on motorcycles.

Victims are occasionally tipped off in advance that they are on a kill list and attempt to flee into hiding.

At his church in Quezon City on the outskirts of Manila, one of the few to have provided sanctuary is Father Gilbert Billena, despite admitting that he voted for Duterte in the election last year.

Even me, I was in favour of the war on drugs but I didnt expect this outcome, he said.

Many Filipinos support the executions, believing their neighbourhoods are safer, while others are afraid to speak out for fear that they will be accused of collaboration.

Despite the fear, a growing number of churches have opened their doors and their network of safe houses to people at risk of being targeted.

In one hideaway is an 18-year-old who asked for anonymity. In December, he survived a deadly vigilante-style shooting at a house party in one of the Philippines major cities. Seven people, most of them teenagers, were killed. He suffered a bullet in his abdomen.

The young man lives in fear, afraid the shooters may want to finish the job. There were rumours that there was a survivor and it was me the ones who did this would think theres a witness, he said.

Immediately after the slaughter, he sought sanctuary from the only institution that would take him in.

The church has helped him find temporary work, which he says he enjoys, but he worries about being exposed to strangers. Fireworks frighten him and he suffers from nightmares and insomnia.

These are the people who have been targeted by the cops, says Billena, the spokesman for Rise Up, a multifaith movement founded to resist the drug war. We offer the church to them on the condition that they should be serious about changing [their lives].

Children’s hospital is first to be rated ‘outstanding’ – BBC News

A specialist children’s hospital has become the first of its kind to receive a rating of “outstanding” from healthcare inspectors in England.

Birmingham Children’s Hospital was criticised eight years ago for having insufficient numbers of beds, operating theatres and trained staff.

But now the Care Quality Commission has praised the NHS trust for “working effectively to provide the best care”.

The head of the hospital has paid tribute to her 3,700 staff.

I spent a day there to hear from patients, families and staff.

Seven-month-old Connor McCue was diagnosed with a rare liver condition at the age of 12 weeks.

He is recovering from his second transplant and sleeping peacefully on a large intensive care bed.

Connor’s mother, Jess, turned 28 recently – and the children’s hospital staff put up balloons and cards for her.

She told me: “We’ve nearly lost Connor several times in the last six weeks of being here – without them, we wouldn’t have a child lying in this bed.

“While he is still quite poorly, we have every faith we’ll get to take him home. That’s the only thing you ask as the parent of a sick child.”

Supporting the whole family, and helping young patients feel relaxed in a busy and daunting environment, are extra challenges for specialist children’s hospitals.

In the busy outpatients clinic, Macey Hardcastle, five, who has a genetic condition called Stickler syndrome, has just had her hearing and sight checked.

She said: “I play so I don’t get bored. I feel OK about coming here because I know it’s going to be OK.”

Another patient, Nyadhiel Nyoat, 12, told me: “I was with a doctor here a couple of weeks ago. It was very relaxed – he wasn’t scary or anything.

“He actually helped me, and I felt confident to talk about some issues.”

The emotional support given to bereaved parents has also been praised in Tuesday’s report.

And families facing the worst of times, when a child needs end of life care, will now be able to use a new 1m unit within the hospital grounds, called Magnolia House.

Rachel Ollerenshaw, whose daughter Molly died from kidney cancer at the age of eight in 2011, has helped raise thousands of pounds for soft furnishings in the rooms, which have a show-home feel and some outdoor space.

She said: “When your child has a terminal illness and you’re being given news about that, you feel you can’t breathe sometimes and you need fresh air.

“You need a place where you can absorb the information. There wasn’t anywhere like this in the existing building in Birmingham at that time – where you could just be together as a family.”

Fiona Reynolds is the hospital’s most senior doctor – and has spent 16 years at Birmingham Children’s Hospital.

She says listening to the views of patients and staff, and acting on their ideas, has helped turn the trust around.

Dr Reynolds said: “It was a difficult time. Some of our specialist teams didn’t have the right training and we weren’t pulling together as a team.

“Since then we’ve used our beds more wisely, and co-ordinated our care in a more logical fashion, so we can look after more patients in around the same number of beds.”

The trusts’s chief executive, Sarah-Jane Marsh, said: “For the last five years we have been all about building and developing one giant healthcare team with 3,700 members – and it is wonderful to see this shining through in the report.”